This series incorporates the traditional Italian goblet techniques adjusted to for vertical hanging sculptural forms similar to ornaments. Think of simplified patterns found in doilies applied to glass forms in three-dimensions. It should be noted the exploration in adapting this process directly fertilized the creation of Aquanauts, Cosmonauts, and the unique forms found in the Spirt Catchers.

It is a tradition among glassblowers to create and hang a spirit catcher, or “witchball”, in their studios to assure successful glassblowing and good fortune. As early as the mid-1700’s, glassblowers were known  to hang witchballs in their homes to protect them from witches’ spells and evil spirits. It is thought to work by attracting evil spirit’s with the bright colors and patterns. When evil spirits are near, they are lured to the opening in the underside of the piece. There they become confused and unable to escape until they eventually dissipate. 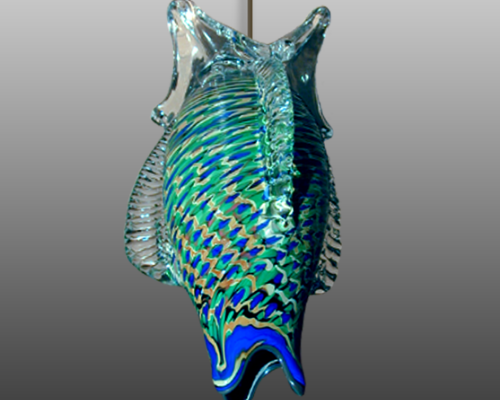 Although a completely unique process is involved in the creation of these pieces, they are direct descendants of the Aquanauts. Sometimes referred to as ‘Splats’, “Amoeba’s’ and ‘Starfish’, these pieces resemble some organic form one might find under sea. They are influenced through personal observation and interpretation. 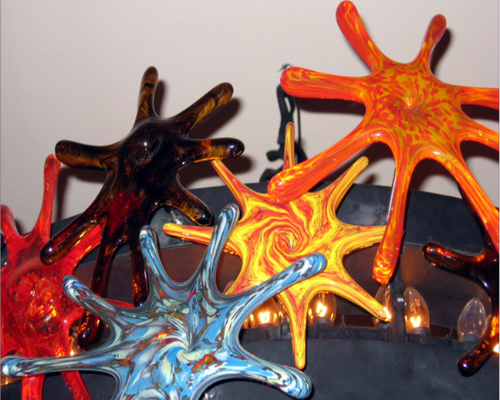 This series was initially formed in 1989 through the influence and collaboration with Bill Bagly. Bill directed the glass program at Texas Tech University. The concept is a take off on the evolio used in traditional venetian goblets which creates focus on the patterns and colors of each piece by creating an integrated foot, or stand, that visually lifts the piece off the ground. As these pieces developed, color was explored into the foot which proves to add to the sculptural spirit in the series. Similar to the Spirt Catchers and Cosmonauts, these pieces resemble some organic for one might find under sea. They are influenced through personal observation and interpretation.

The Venetians are basically large scale goblets, simplified. Simplified only due to process. Very elegant and modern with a hint to memories through their relatively transitional forms. These pieces incorporate multiple forms combined translated literally into their larger forms. This concept gave way to the creation of the Totem series.

These are basically over scaled, simplified goblet forms with a derivative on the Totem design connected with over scaled evolio forms. Like the Venetians, they are very elegant and modern with a hint towards traditional Italian glass forms. These pieces have been well received with the Symphony chalis being accepted into The White House Collection.

There are two types of these design with this series encompassing the opposites attract theory. One type focuses on layers to create a dicotomy with two different looks in a single piece dependent on lighting from either the back or the front resulting in very apparent color and pattern details being revealed. The other is based on form and shape. These are intended to embrace on another in unison. Each form cradles the other in progression. These series also places further emphasis on the Spiral concept as each piece leads to the next in form, color, and texture.

These pieces are very curvy with simple singular shapes, forms, and color. They are similar to the Venetian series in nature. Again, overscaled, elongated tubular forms, these pieces average 30″ in height. Most of these pieces incorporate a contrasting color for the lip wrap.

The name is in reference to the top neck in the forms which incorporates a curvy loop at the top. With an elongated integral tubular loop form, these pieces are average size ranging from 6″ to 18″ in height. Color and pattern vary and often include the spiral wrap pattern with a single base color and contrasting lip wrap.

The name is similar to the form in this series. Being elongated fluted tubular forms, these pieces are oversized in scale averaging 42″ in height. Color and pattern design ranges, but usually incorporates the spiral wrap pattern in multiple overlappy layers. 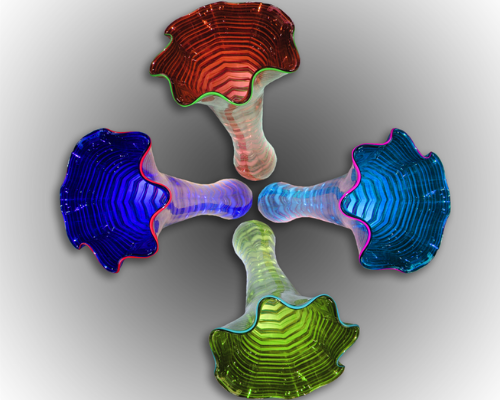 This body of work obviously takes reference from the sea forms in their titles. They both include a contrasting transparent single sandblasted color in a pointed cylinder form reaching out from a main focal base piece which is much more detailed in color, form, and pattern. These pieces stem from an enlarged version of the cosmonauts.

This series resulted through the Drop Vase series in combination with a modified interpretation of pulling cane and latticino. The reeds are vertical in application, extending from the ground. The ribbons tend to be more fluid in nature and horizontally mounted on wall surfaces.